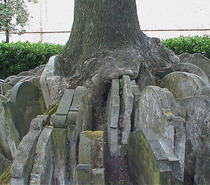 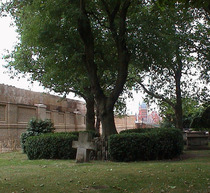 Not strictly a memorial but irresistible to include.

As railway lines were constructed through densely built-up parts of London, they often crossed old churchyards. The son-of-a-bishop architect Arthur Blomfield was commissioned by the Bishop of London to supervise the proper exhumation of human remains and dismantling of tombs. For the Midland Railway's route across the original St. Pancras Churchyard.In about 1865 he passed this unenviable task onto his trainee, Thomas Hardy.

The work was done behind hoardings and Hardy would visit to ensure the work was being done correctly. It was at this time that the headstones were placed around this Weeping Ash (Fraxinus excelsior) and since then the tree has grown around them. It is not known whether Hardy was responsible for this unusual solution to the question of what to do with all the headstones.

His poem "The levelled churchyard" was surely inspired by this experience:
We late-lamented, resting here,
Are mixed to human jam,
And each to each exclaims in fear,
'I know not which I am!'

This Ash is one of the Great Trees of London.

August 2019: A parasitic fungus that has appeared on the tree means that it has been pruned and cordoned off. The CNJ reports "grave concern".

This section lists the subjects commemorated on the memorial on this page:
Hardy's tree