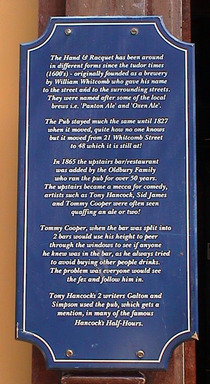 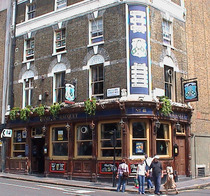 The Hand & Racquet has been around in different forms since the Tudor times (1600's) - originally founded as a brewery by William Whitcomb who gave his name to the street and to the surrounding streets. They were named after some of the local brews i.e. 'Panton Ale' and 'Oxen Ale'.

The Pub stayed much the same until 1827 when it moved, quite how no one knows but it moved from 21 Whitcomb Street to 48 which it is still at!

In 1865 the upstairs bar/restaurant was added by the Oldbury Family who ran the pub for over 50 years. The upstairs became a Mecca for comedy, artists such as Tony Hancock, Sid James and Tommy Cooper were often seen quaffing ale or two!

Tommy Cooper, when the bar was split into 2 bars would use his height to peer to through the windows to see if anyone he knew was in the bar, as he always tried to avoid buying other people drinks. The problem was everyone would see the fez and follow him in.

Tony Hancock's 2 writers Galton and Simpson used the pub, which gets a mention, in many of the famous Hancock's Half-Hours.

In 2009 Alan Patient reported that "the pub has been boarded up for many months and the plaque removed."  2013: The Victorian Society are fighting to save this building from demolition, and it's there that we learn "The name refers to the tennis court and the national headquarters of the game which had been located across the street until 1866." 2015: Alan Patient reports that the battle was lost - the pub and a lot of the surrounding buildings have been demolished.  Very sad.

This section lists the subjects commemorated on the memorial on this page:
Hand & Racquet

Plaque laid flat in the ground, to the west of the flagpole, to the right in ...