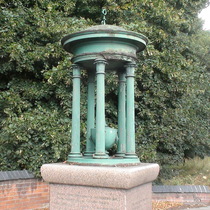 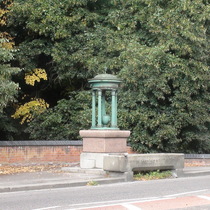 {On the capital of the plinth, just below the metal structure, facing the road:}
The gift of Robt. Hanbury Esq. MP

{On the plinth, facing the road and then anti-clockwise:}
The fear of the Lord is a fountain of life. Prov. 14:27
{at the bottom right of this face:}
Wills Bros Sc.

I will give unto Him that is athirst of the fountain of the water of life freely. Rev. xxi:vi

With thee is the fountain of life; in thy light shall we see light. Ps xxx:vi
At the bottom of this face:}
M. D. Fountains Association

{The trough in front of the fountain has no dedication that we could see.}

If you think this classically-styled fountain looks out of place in these leafy surroundings, you are right. It was originally installed in June 1860 on Strand at Somerset House - The Wimbledon Society have a photo of the fountain on Strand, showing a few buildings behind the fountain, one of which is The Coach and Horses which elsewhere we find was at "323 & 324 Strand, St Mary le Strand", but 323-4 don't appear on Strand on a modern map so we guess it got renumbered after the early 20th century redevelopment of the area to the north. However the photo also shows a 4-storey building marked as Great Northern Railway Company - which we believe, after being rebuilt, or refaced, became the, now defunct, Strand Station building - extant. This would put the fountain's original location in the middle of Strand, just to the west of the Surrey Street junction. And we believe it is marked on this map, as "Tr.& D. Fn." (trough and drinking fountain).

In the 1890s Hanbury lived at Sidney Lodge, Parkside. This was renamed Westfield and has been a "home of a Victorian school for Roman Catholic children" but was redeveloped and in 1983 became 53, Parkside Hospital. Hanbury died in April 1903 and on 1 March 1904 the fountain was relocated to its present site. We'd guess this was prompted by the redevelopment of the Aldwych area and that, given Hanbury's death, Wimbledon was seen as an appropriate destination.

Our researches began with information from the ever-helpful MDFCTA.

This section lists the subjects commemorated on the memorial on this page:
Hanbury fountain

Robert William Hanbury. Conservative politician. President of the Board of Ag...

This section lists the subjects who helped to create/erect the memorial on this page:
Hanbury fountain

The memory of the just is blessed. In memory of Joseph Payne, June 1870.

The inscription which is on marble is barely legible, so we are grateful Wiki...