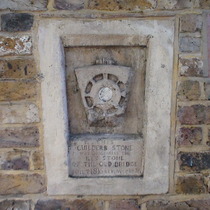 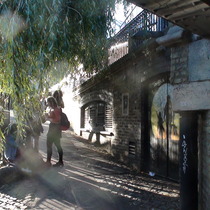 This Guilders Stone was originally the key stone of the old bridge, built 1815, removed 1876.

The phrase "Guilders Stone" has not been explained, other than a suggestion that it originally read "Builders Stone" and that a 1990s renovation might have caused the error. It's easily in living memory - surely someone knows more. We'd also like to know the significance of the central white stone, the spoked wheel and the crest.

This section lists the subjects commemorated on the memorial on this page:
Guilders Stone

The Listing for the current bridge tells us it is a "Public road bridge over ...

This section lists the other memorials at the same location as the memorial on this page:
Guilders Stone

George VI and the library

The opening of a temporary library seems a rather minor event for which to ge...

Queen Mary died in 1953 at her home, Marlborough House, which is the building...

2017: The plaque is no longer here (our photograph of it was taken some years...