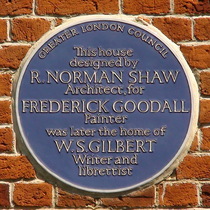 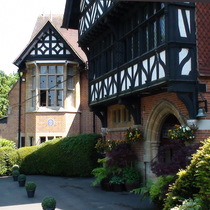 Grim's Dyke was designed by R. N. Shaw in 1872 for Frederick Goodall. He sold in 1880 to Robert Herriot of Hambros Bank from whom,Gilbert bought in 1890. After Gilbert's death Lady Gilbert and her companion stayed continued to live here. Following Lady Gilbert's death in 1936 the Council took on the house. It was used as a tuberculosis rehabilitation centre, and by the services during WW2. 1970 it was converted into a hotel and is now, 2017, run by Best Western.

See the lost plaque in the grounds for information about Gilbert's death and the Charles II statue.

This section lists the subjects commemorated on the memorial on this page:
Grim's Dyke

This section lists the subjects who helped to create/erect the memorial on this page:
Grim's Dyke

Hammersmith and Fulham Historic Buildings Group tell us that the discrepancy ...