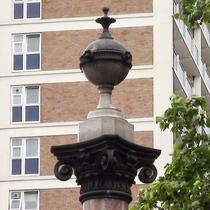 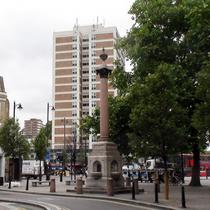 {The column sits on a four-sided plinth, on top of a large four-sided base, which has a basin on each face. The plinth is inscribed with:
South-east face:}
Great Eastern Street opened by The Metropolitan Board of Works, 1876.
{North-east face:}
Neither is he that planteth any thing neither he that watereth, but God that giveth the increase.
1 Cor. 3:7
{North-west face:}
This column erected by the vestry of St. Leonard, Shoreditch, 1880.
{South-west face:}
The vestry of St. Leonard Shoreditch, constituted, 1855.

{On the south west face a metal plate, replacing the water spout part of the fountain reads:}
Originally sited as part of the Great Eastern Street improvements 1882. Relocated 2002.

Pink and grey polished granite, sandstone capital and a ball finial in the form of an orb. Surrounded by eight pink granite bollards.

The inscription claims that the column was erected in 1880 but IanVisits says it was unveiled on 28 February 1881, by the MP formerly known as Hogg.

From Hackney "the fountain was erected to ornament Great Eastern Street, an important new thoroughfare connecting Commercial Street and the docks with the principal east-west route to the north of the City. The designer, A. Nicholson, was a local stone merchant based nearby in Mark Lane. The fountain was moved a short distance to the south-east as part of a programme of street improvements overseen by Transport for London in 2002/3."

This section lists the subjects commemorated on the memorial on this page:
Great Eastern Street fountain

Metropolitan Board of Works

Responsible for managing London's infrastructure, such as roads, sewage, etc....

This section lists the subjects who helped to create/erect the memorial on this page:
Great Eastern Street fountain

Politician and civil administrator. Born in Calcutta. The elder brother of Qu...

The water source was discovered at the end of the 17th century. 'Chalybeate' ...