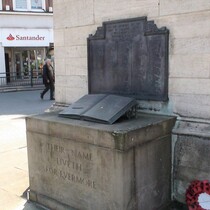 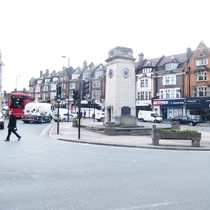 {Upper plaque:}
To the memory of the men of Golders Green who made the supreme sacrifice 1914 - 1918.
{Followed by 178 names. See Subjects commemorated}.

{Lower plaque in the form of an opened book:}
1939 - 45 in grateful and honoured memory to the women & men of Golders Green Hampstead Garden Suburb and Childs Hill Wards who gave their lives in defence of their country.
{Followed by 162 names. See Subjects commemorated}.

{Beneath the plaques:}
Their name liveth for evermore.

{At the top of each side of the monument:}
Courage
Honour
Justice
Loyalty

Note that this memorial has no religious iconography. Golders Green has had a strong Jewish demographic since the early 20th century so when the community raised the funds for this monument, helped by variety shows at the nearby Hippodrome, the design was secular.

The additions for WW2 were the open book and its supporting podium.

In 2017 there were plans to improve the road layout of this junction which would mean moving the monument.  Given the growing recognition that "improving" roads only ever increases traffic one hopes that these plans have been quietly dropped.

This section lists the subjects commemorated on the memorial on this page:
Golders Green war memorial