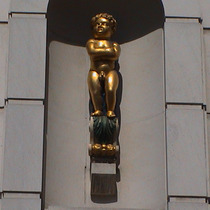 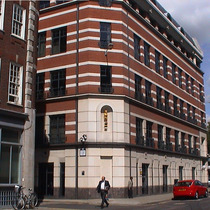 {Immediately below the gold on the scrolled bracket supporting the boy:}
Puckridge fecit, Hosier Street

{On a plaque immediately below the bracket:}
This Boy is in memory put up for the late Fire of London, occasion'd by the sin of gluttony, 1666.

{On the large plaque at street level:}
The Golden Boy of Pye Corner
The Boy at Pye Corner was erected to commemorate the staying of the Great Fire which, beginning at Pudding Lane, was ascribed to the sin of gluttony when not attributed to the Papists as on the Monument, and the boy was made prodigiously fat to enforce the moral. He was originally built into the front of a public-house called 'The Fortune of War' which used to occupy this site and was pulled down in 1910.

'The Fortune of War' was the chief house of call north of the river for resurrectionists in body-snatching days years ago. The landlord used to show the room where on benches round the wall the bodies were placed, labelled with the snatchers' names, waiting till the surgeons at Saint Bartholomew's could run round and appraise them.

The sign of the magpie was once at this corner and it was from this bird that this corner became known as Pie Corner. The figure is of oak and from the late 17th century while the inscriptions are more recent. There seems to be no evidence that the, not particularly fat, boy was erected to commemorate the Great Fire. It's more likely that the figure was a shop sign. No reason to believe the attibution to Puckridge either, though Hosier Lane is very close, one street north. Sorry to shatter your illusions but we trust Philip Ward-Jackson's 'Public Sculpture of the City of London' and he's not taken in.

Various stories connected with this corner are told at Flickering Lamps. That page includes a map showing where this corner is in relation to the area destroyed by fire. It is indeed on the edge but then so are many other corners and streets, etc. It's not even the most westerly or northerly. And surely no one would have known which section of the fire was put out last. So one wonders in what sense this is the corner where the fire stopped rather than any other.

A London Inheritance has a full post on this area and has a photo of the Golden Boy on a previous, late 19th century, building.

This section lists the subjects commemorated on the memorial on this page:
Golden Boy & Great Fire of London

The Golden Boy was originally attached to the front of this public-house and ...

This section lists the subjects who helped to create/erect the memorial on this page:
Golden Boy & Great Fire of London

16 bronze standards, each decorated with texts and motifs of New Zealand, suc...

Seeing as how this face has only one eye, and it's closed, the quotation seem...