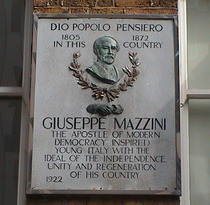 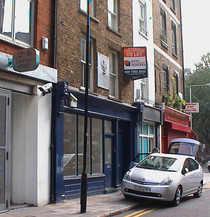 Dio popolo pensiero. {God people thought}
1805 - 1872.
In this country Giuseppe Mazzini, the apostle of modern democracy, inspired young Italy with the ideal of the independence, unity and regeneration of his country.
1922

It seems likely that "1922" is the date the plaque was erected - exactly 50 years after Mazzini's death.

From Mazzini-Garibaldi Club: This club was founded in May 1864 as La Società per il Progresso degli Operai Italiani in Londra under the joint presidency of Guiseppe Mazzini and Guiseppe Garibaldi. Initially, the club met at Mazzini's house in 5 Hatton Garden and then moved to 106 Farringdon Road, and then, in 1877, to 10 Laystall Street. In 1930 the club moved to 51 Red Lion Street but, since Italians were deemed enemy aliens, these premises were confiscated 1940-45. After the war they were returned and the club contined there until the premises were sold in 2008 and the funds used for a charitable trust that benefits the London Italian community.

Since the club did not use this address until 1877, 5 years after Mazzini had died, it seems unlikely that he has any connection to the building.

This section lists the subjects commemorated on the memorial on this page:
Giuseppe Mazzini - Laystall Street

We thank our colleague for spotting and snapping this on a recent visit to th...