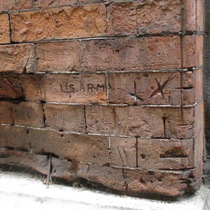 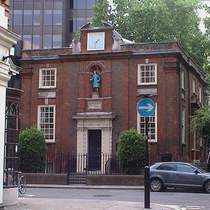 2015 - an information board has been added: Erected in 1709, Blewcoat School is built of red and yellow brick with rubbed brick and stone dressings.  At each corner Doric pilasters rise from the ground, supporting entablatures.  Inside lies a single handsome pine-panelled room with a light, airy coved ceiling, with a basement beneath.  In 1974 this room was enriched with a large grey and gilt-work chandelier from Bruerne Abbey, Oxfordshire.  The building is listed grade 1.  Built to house charity school founded in 1688 by William Greene, a local brewer, on the open land of Tothill Fields then owned by Westminster Abbey.  The school educated and clothed twenty boys from the parishes of St Margaret and St John for free alongside fee-paying boys.  The School remained in used until 1954 when it was acquired by the National Trust.  In 2013 Ian Stuart was granted permission to refurbish the interior to house his clothing collections.

The brick graffiti, at the west door, was brought to our attention by Caroline's Miscellany who learnt of it on a Blitzwalkers walk.  She says that the school closed in 1928, and that during WW2 it was used as a store guarded by American troops.   It looks rather as if the artist was interrupted before he finished the "y" and that he had some less literate pals.

This section lists the subjects commemorated on the memorial on this page:
GI graffiti on bricks

This section lists the subjects who helped to create/erect the memorial on this page:
GI graffiti on bricks

This section lists the other memorials at the same location as the memorial on this page:
GI graffiti on bricks

{On a stone plaque below the statue:} The Blewcoat School, built in the year ...