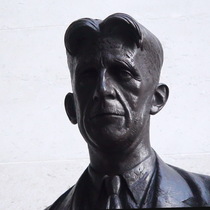 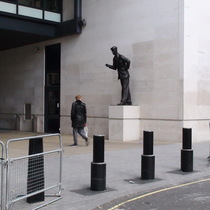 {On the plinth:}
George Orwell

{On the wall behind:}
If liberty means anything at all it means the right to tell people what they do not want to hear.

At 6' 2" Orwell was a tall man, but this statue is 2.5 metres (over 8'). He struggled with ill-health most of his life and died of tuberculosis. The constant smoking was surely a contributory factor but at that time the dangers of smoking were not recognised. It's odd that this and the only other 4 smoking statues we can think of, in London, have all been erected since the acquisition of this knowledge: Oscar Wilde (by that pro-smoking sculptor Maggi Hambling), Sherlock Holmes and Churchill in 50 years of Peace. And a relief portrait of Brunel at Paddington Station depicts him with an insouciant cigar in his mouth.

The Guardian informs that this statue was privately funded "through a trust founded by the late Labour MP Ben Whitaker." It's said to be the only statue to Orwell.

Orwell worked at the BBC during WW2 but, also relevant, his views on language and verbal clarity explain the BBC providing a home for his statue. The name of the BBC show 'Room 101' is inspired by a room of torture in Orwell's novel '1984'. Orwell is said to have named that after a room in which he worked during WW2, in Broadcasting House, outside which this statue is sited.

2020: The Guardian quoted Billy Bragg commenting on the inscription here: "...whenever I walk past this effigy of the English writer that I most admire, it makes me cringe. Surely the author of Nineteen Eighty-Four would understand that people don’t want to hear that 2+2=5?  For Orwell’s quote is not a defence of liberty; it’s a demand for licence, and has become a foundational slogan for those who wilfully misconstrue one for the other. Over the past decade, the right to make inflammatory statements has become a hot button issue for the reactionary right, who have constructed tropes such as political correctness and virtue signalling to enable them to police the limits of social change while portraying themselves as victims of an organised assault on liberty itself."

This section lists the subjects commemorated on the memorial on this page:
George Orwell statue

This section lists the subjects who helped to create/erect the memorial on this page:
George Orwell statue