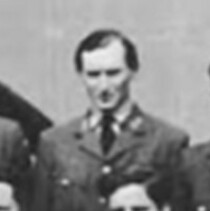 Flight Lieutenant Frederick John Shirley Chapman was born on 11 February 1915 and his birth was registered in the 1st quarter of 1915 in the Penzance registration district, Cornwall.

The 1934 UK Medical and Dental Students Register shows that having obtained his Oxford schools certificate in June 1932 he was registered in Oxford University in 1934 to study medicine. The Medical Directory of 1942 confirms that he obtained his Bachelor of Medicine in 1940 and had trained in hospitals in both Oxford and London having been a house surgeon at the Emergency Hospital, Bishops Stortford.

He joined the Royal Air Force Volunteer Reserve, service number 64842 as a Flying Officer where he was appointed as the doctor to No.133 (Eagle) Squadron and was promoted from Flying Officer to Flight Lieutenant on 11 April 1942. He is shown standing 9th from left to right in our Picture source.

This section lists the memorials where the subject on this page is commemorated:
Frederick John Shirley Chapman

At least two firemen from the Silvertown Fire Station responded to the fire a...