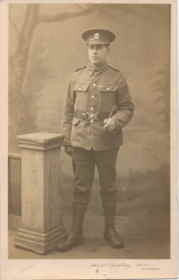 Private George Arthur Down was born on 8 June 1884 in Putney. He was the eldest of the six children of William Down (1859-1943) and Emily Elizabeth Down née Hunter (1859-1947). His father was a boot-maker who later became a postman. He was educated at St Mary’s Boy School, Felsham Road, Putney and the 1891 census shows him living at 1 March’s Place, Putney with his parents and two younger sisters, Emily Elizabeth Down b.1885 and Evelyn Marian Down (1889-1957). The 1901 census states that he was a plumber’s boy living at 3 Pentlow Street, Putney, with his parents, his two sisters and three younger brothers, Herbert William Down (1892-1975), Walter Down (1894-1916), who was to die from dysentery whilst serving with the Welsh Regiment in Mesopotamia, and Robert Dunlop Down (1897-1955). The 1911 census confirms that he was a house painter, still residing at 3 Pentlow Street, Putney, with his parents, the elder of his two sisters and his three brothers.

In September 1916 he enlisted in The Buffs (East Kent Regiment), service number T/202160, and served in ‘B’ Company of their 1st Battalion in the Expeditionary Force in France and Flanders from April 1917. His unit was billeted at Mazingarbe and Foquieres, Pas de Calais, France, between periods of duty at the Loos-Hulluch trenches, Artois, France and on 7 July 1917 at 2.55 am a strong enemy raid was made and a party of the enemy, about 60 strong, attempted to enter the trenches. This raid was repulsed by rapid rifle fire but the losses were severe, amounting to 20 killed and 15 wounded. Aged 33 years, he was one of those killed in this action and was buried in Plot 1, Row T, Grave 7, in the Philosophe British Cemetery, Rue Alexandre Dumas, Mazingarbe, Pas de Calais, France.

He is also commemorated on a plaque listing all the men of Putney who died in World War One inside St Mary’s Church, Putney High Street, London, SW15 1SN and the original grave marking cross, that was used before the Commonwealth War Graves Commission provided a standard gravestone, is displayed in All Saint’s Church, Putney Common, London, SW15 1HN.

This section lists the memorials where the subject on this page is commemorated:
George Down