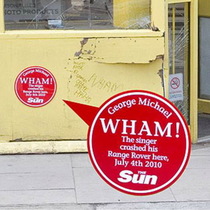 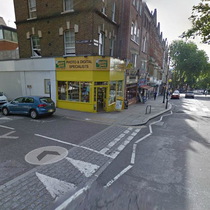 By the time we got there (in 2014 - it was not top of our priority list) the plaque/sticker had gone (if it had ever existed outside of Photoshop) so we are using the image from The Sun's studious report on this significant event (2016 - link no longer working).

The Evening Standard and even The Guardian reported on this event. The "47-year old singer" had been driving to his home in Highgate. The crash occurred in the early hours of the morning and Michael was found slumped at the wheel, "spaced out" and confused.  Arrested and bailed pending further enquiries. This crash was one of a series of negative newsworthy events between 2006 and 2010, involving drugs. And then in 2013 he managed to fall out of a car travelling on the M1.

No photo of the crash (although someone has created a Youtube video of how it would have looked from inside the car, had it been daytime and had the driver actually been looking).

Our picture of the scene comes from Google Street View, July 2016.

This section lists the subjects commemorated on the memorial on this page:
George Michael crash

This section lists the subjects who helped to create/erect the memorial on this page:
George Michael crash

{Around the top edge:}Queen Elizabeth II Field {In the centre, below the roy...

The plaque was unveiled by actor Russell Tovey and Mayor of Wandsworth, Lesli...