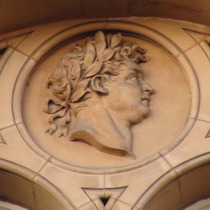 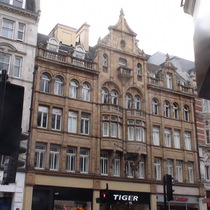 These two relief roundels are above the two central third floor windows but even people who examine this facade may miss the royal visages, being more taken by the 4 charming beavers which decorate the roof-line. See Cabbie Blog for a close-up picture of one and the sorry story of the use of beaver fur in hat production.

"1822" refers to the establishment of the firm during George IV's reign; "1887" the date of this building, and of Victoria's Golden Jubilee. Note also the large white "H H" above the mansard windows.

This Oxford Street address is where customers came for their top hats. Another building directly behind, in Hollen Street, is less ornate but still proudly named in friezes: "Hat Factory, Henry Heath, Oxford Street". One assumes HH also owned all the land between, which is an extensive area - perhaps there was a large open yard.

This section lists the subjects commemorated on the memorial on this page:
George IV - Oxford Street

This section lists the other memorials at the same location as the memorial on this page:
George IV - Oxford Street