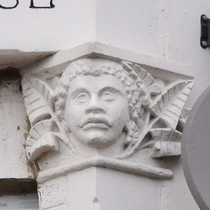 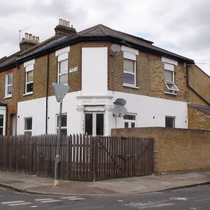 c.2012: Brought to our attention by Clive Yelf on his always interesting blog, Faded London which seems to have folded. Wanting to establish a link between the name of this modest building, Norfolk House, and the characters apparently represented on the capitals Clive carried out extensive research and discovered that Daniel Defoe was fond of Norfolk and that in St Nichols' Chapel, Kings Lynn, there are memorials to several individuals by the name of Robinson Cruso. QED

2017: We are grateful to Wade Brice who, via Facebook, pointed out that just a few streets south of this house are: Robinson Road, Crusoe Road, Pitcairn Road, Island Road, Friday Road. Wade writes "These were named as Defoe allegedly lived at nearby 'Tooting Old Hall'. Source: pages 33 to 36 Mitcham Histories: 2 - North Mitcham, by the late E.N. Montague, of the Merton Historical Society." With that information we also found the 1766 Defoe Chapel, in Tooting High Street, and that a nearby section of Garratt Lane used to be called Defoe Road. A Merton leaflet gives the location of Tooting Old Hall as Woodley Close, just north of Pitcairn Road.

This section lists the subjects commemorated on the memorial on this page:
Friday

Character in the novel Robinson Crusoe. In the picture Friday is grovelling ...

This section lists the other memorials at the same location as the memorial on this page:
Friday

This bust, high up in the pediment, is supported on each side by a muse, in t...