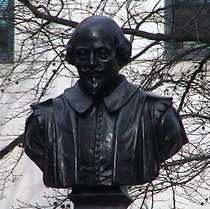 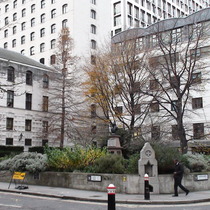 {Inscribed on the plinth just below the bust:}
Shakespeare
{Below this there is an open marble book with a small marble scroll above. On the scroll is written:}
The First Folio
{On the left page of the open book:}
Mr William Shakespeare's comedies, histories & tragedies, published according to the true originall copies, London 1623
{On the right page of the open book:}
We have but collected them and done an office to the dead . . . Without ambition either of selfe profit or fame, onely to keepe the memory of so worthy a friend & fellowe alive as was our Shakespeare.
John Heminge
Henry Condell

{On a plaque attached to the west face of the stand:}
To the memory of John Heminge and Henry Condell, fellow actors and personal friends of Shakespeare. They lived many years in this parish and are buried here.
To their disinterested affection the world owes all that it calls Shakespeare. They alone collected his dramatic writings regardless of pecuniary loss and without the hope of any profit gave them to the world. They thus merited the gratitude of mankind.

{at the bottom of the monument:}
Given to the nation by Charles Clement Walker Esqr., Lilleshall Old Hall, Shropshire.

{On a plaque attached to the north face of the stand:}
The fame of Shakespeare rests on his incomparable dramas,. There is no evidence that he ever intended to publish them and his premature death in 1616 made this the interest of no one else. Heminge and Condell had been co-partners with him in the Globe Theatre Southwark, and from the accumulated plays there of thirty five years with great labour selected them. No men then living were so competent having acted with him in them for many years and well knowing his manuscripts they were published in 1623 in folio thus giving away their private rights therein. What they did was priceless. For the whole of his manuscripts with almost all those of the dramas of the period have perished.

{On a plaque attached to the east face of the stand:}
John Heminge lived in this parish upwards of forty two years and in which he was married. He had fourteen children, thirteen of whom were baptized, four buried, and one married here. He was buried here October 12 1630. His wife was also buried here.

Henry Condell lived in this parish upwards of thirty years. He had nine children, eight of whom were baptized here and six buried. He was buried here December 29 1627. His wife was also buried here.

"Let all the ends thou aim'st at be thy country's thy God's and truth's"
Henry VIII Act 3 Scene 2.

This section lists the subjects commemorated on the memorial on this page:
Shakespeare's bust - EC2

Fellow actor and friend of William Shakespeare and John Heminge. Heminge and...

Fellow actor and friend of William Shakespeare and Henry Condell. Heminge an...

This section lists the subjects who helped to create/erect the memorial on this page:
Shakespeare's bust - EC2

Andrew Behan has very kindly done some solid work on Walker in the census ret...

This section lists the other memorials at the same location as the memorial on this page:
Shakespeare's bust - EC2

Bronze. Replica of the bust in St Paul's. Albeit this is a relief rather than...