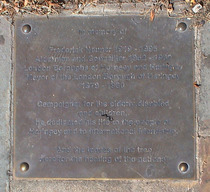 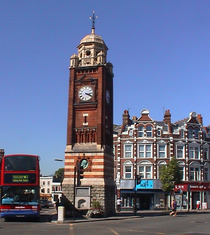 In memory of Frederick Neuner 1919 - 1995, Alderman and Councillor 1952 - 1982, London Boroughs of Hornsey and Haringey, Mayor of the London Borough of Haringey, 1979 - 1980.
Campaigner for the elderly, disabled and children, he dedicated his life to the people of Haringey and to international friendship.
"And the leaves of the tree were for the healing of the nations."

There is a clock dial on each of the four facades, and they are all working - August 2004 anyway. Above each dial is inscribed "1895".

In April 2006 a local magazine was asking, with reference to the Ordinance Survey benchmark on the tower's west face, at the base, why it had been painted blue.

This section lists the subjects commemorated on the memorial on this page:
Frederick Neuner

This section lists the other memorials at the same location as the memorial on this page:
Frederick Neuner

Planted on 25th June 1995 to celebrate the spirit and vitality of the childre...

We decided against transcribing the apostrophe in "tree's" and using the Lati...

This 1843 picture of the tree, from the Illustrated London News comes from Vi...

In memory of Councillor Paul Matthews, Deputy Mayor of Islington and Vice-Cha...