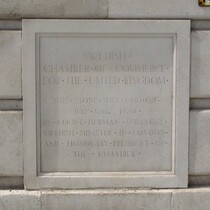 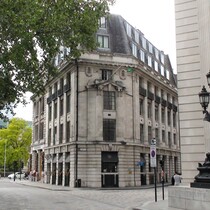 Swedish Chamber of Commerce for the United Kingdom
This stone was laid on July 6th 1920 by Count Herman Wrangel, Swedish Minister in London and Honorary President of the Chamber.

In our photo the plaque is on the wall facing left. The original front door was almost certainly on the corner of the building, facing the camera.

The story of this building is given at Swedish Chamber of Commerce: "As the Chamber’s activities expanded and as a result of a growing team, architect Mr Niven proposed that the Chamber should have a building of its own, a symbol for its growing importance. He produced a plan for a building facing Trinity Square on Tower Hill. Thanks to a number of generous donors, ..., it was possible to start the building project. The foundation stone was laid in June 1920 by Count Wrangel in the presence of Hjalmar Branting, the Swedish Prime Minister. A year later the building was completed and formally opened by His Royal Highness the Crown Prince of Sweden, later King Gustav VI Adolf."

This section lists the subjects commemorated on the memorial on this page:
Swedish Chamber of Commerce

The subject of a London Chamber was first discussed in early 1906, when a num...

This section lists the subjects who helped to create/erect the memorial on this page:
Swedish Chamber of Commerce

This may have been some sort of official address but it seems he actually liv...

The modern information board at the entrance to the gardens points out that t...