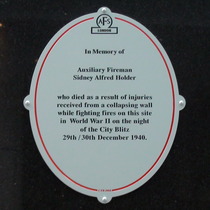 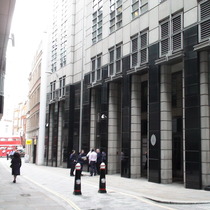 AFS London
In memory of Auxiliary Fireman Sidney Alfred Holder who died as a result of injuries received from a collapsing wall while fighting fires on this site in World War II on the night of the City Blitz 29th / 30th December 1940.
© FR 2007

Blitzwalkers give a good description of the incident. The AFS squad sent to fight this fire included Holder, the war artist Leonard Rosoman and the future writer and novelist William Sansom. Passers-by stopped and offered to help, including the off duty soldier who was the other fatal casualty of the fire. Rosoman was deeply affected by the event and painted it afterwards. We have used this painting as our picture for Holder since we can find no other.

This section lists the subjects commemorated on the memorial on this page:
Fireman Sidney Alfred Holder

This section lists the subjects who helped to create/erect the memorial on this page:
Fireman Sidney Alfred Holder

We believe this plaque was erected in 1985, the 40th anniversary of Hiroshima...

The clock above was erected by public subscription in memory of Minnie Lansbu...