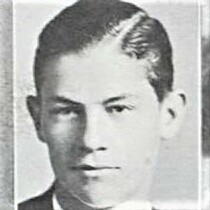 According to the American Air Museum in Britain website, he was a professional golfer before training to be an US service pilot in Tulsa, Oklahoma. He joined the Royal Air Force Volunteer Reserve and came to England in 1940 as a Pilot Officer, assigned to No.121 Eagle Squadron. He transferred into the United States Army Air Forces, later the United States Air Force, and was still serving in 1952.

This section lists the memorials where the subject on this page is commemorated:
Pilot Officer Joseph Ellsworth Durham