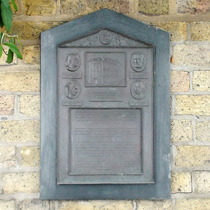 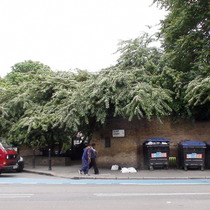 {The centre of the top section shows the building, labelled:}
The Evelina Hospital for Sick Children in Southwark

The lower section carries the text:}
This plaque celebrates the founding of the Evelina Children’s Hospital, which was built on this site in 1869.  It commemorates the work of the founder, planners, doctors, nurses and staff, and all the generous benefactors and supporters during the hospital’s first 107 years.

The hospital was founded by Baron Ferdinand de Rothschild in memory of the early deaths of his wife, Evelina, and their baby son.  The hospital was planned by Dr Arthur Farre, obstetrician to Evelina and the royal family.

The chosen site, Southsea Court in Southwark, was in one of the poorest districts of London, where children were stricken with disease, serious infections and undernourishment leading to many deaths. This new model hospital uplifted the spirit of the people, bringing to a deprived district the hope of fighting the ravages of childhood diseases.

In 1976 the Evelina moved to Guy’s Tower, Southwark, to unite with Guy’s Hospital Children’s Department. The old Evelina building was demolished and the area was converted into Mint Street Park.

The wall in the photo is the remains of the front wall of the hospital building.  Compare it with the picture of that building - you can see the semi-basement window cavities between the recycling bins.  Historic Hospital Admissions Project have a very informative page for this hospital.

This section lists the subjects commemorated on the memorial on this page:
Evelina Children's Hospital

Matron.  Trained at St Bartholomew's Hospital.  Appointed in 1879 to lead the...

Born into a rich and well-connected family.  Married her cousin, Ferdinand, b...