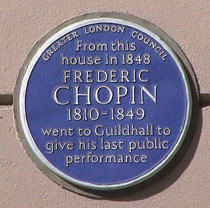 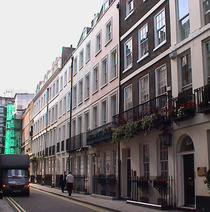 Greater London Council
From this house in 1848 Frederic Chopin, 1810 - 1849, went to Guildhall to give his last public performance.

The Telegraph: "That November farewell, given in aid of a Polish charity, came at the end of a difficult six-month British sojourn, which had included concerts in Manchester (one of the largest audiences he ever faced), Glasgow and Edinburgh, where the non-religious Chopin had unwillingly endured Bible readings by a pious patroness anxious to convert him to the Church of Scotland. Finally back in London, the composer-pianist spent three weeks preparing for what turned out to be his final recital by sitting wrapped in his coat in front of the fire at St James’s Place, attended by London’s leading homeopath and the Royal Physician, a specialist in tuberculosis. A week after the concert, he was on his way home to Parisian exile and death the following year."

This section lists the subjects commemorated on the memorial on this page:
Frederic Chopin - St James's Place

This section lists the subjects who helped to create/erect the memorial on this page:
Frederic Chopin - St James's Place