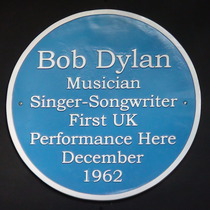 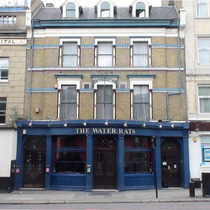 The Guardian has a photo of Dylan performing at the 'Singers Club'. This club was initiated by Ewan MacColl and was, at the time, meeting at the Pindar of Wakefield.

The plaque is in the porch to the left of the building (or was; passing in March 2016 we could not see it so we've marked it as Lost). In 1962 this pub was the 'Pindar of Wakefield' an inn dating back to at least 1680. More recently the Pogues and Oasis also played their first London gigs here.

The unveiling coincided with the last date of Dylan's three concert run at the Royal Albert Hall and he was invited to the 2.30pm unveiling but we don't believe he turned up.

We've heard that there is also a plaque here, in the basement, to Oasis.

This section lists the subjects commemorated on the memorial on this page:
Dylan's first UK venue

Other sources give varying opening and closing dates for the depot.

The plaque shows a shuttle and two bobbins, representing the local weaving tr...

When the May Fair Hotel opened in 1927 Ambrose took a job as band leader that...