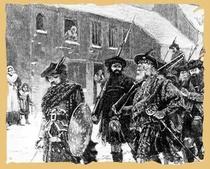 Unit of soldiers raised in Manchester during the 1745 Jacobite Rebellion, supporting Charles Stewart against George II.  300 volunteers commanded by Francis Towneley.  They withdrew to Carlisle which then fell to government forces and most of the Manchester regiment were captured, imprisoned, transported or executed.  A few made it to Culloden, to meet similar fates.

The picture illustrates the Jacobites arriving in Manchester and the Picture source tells the story of Manchester's Jacobite involvement.  e.g.  The three sons of Thomas Deacon, the Bishop of Manchester, all joined the Regiment: one executed, one died of fever, and one transported.

This section lists the memorials where the subject on this page is commemorated:
Manchester Regiment - Jacobites