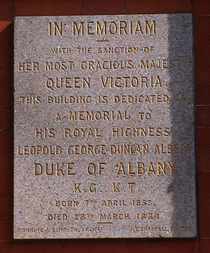 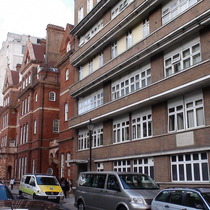 In Memoriam
With the sanction of Her Most Gracious Majesty Queen Victoria, this building is dedicated as a memorial to His Royal Highness Leopold George Duncan Albert, Duke of Albany, K.G., K.T., Born 7th April 1853, died 28th March 1884.

The part of the building fronting Queen Square was redeveloped and opened (although this is not mentioned on the plaque) by the Prince of Wales as a memorial to his, recently late brother, the Duke of Albany.

This Hospital was founded in 1859 as The National Hospital for the Paralysed and Epileptic.  It opened at 24 Queen Square in 1860, and expanded into neighbouring properties. The Duke of Albany plaque can just be seen in the gap between the vehicles.  His daughter's, Princess Alice's plaque is in the foreground on the 1937 extension.  This also has two interesting sculptural reliefs - well covered at Ornamental Passions.

This section lists the subjects commemorated on the memorial on this page:
Duke of Albany

Queen Victoria's youngest son, delivered at Buckingham Palace with the aid of...

This section lists the subjects who helped to create/erect the memorial on this page:
Duke of Albany

This section lists the other memorials at the same location as the memorial on this page:
Duke of Albany

This building, known as the Queen Mary Wing, is an extension to the hospital ...

The right-most of 3 plaques on the back wall of the garden.