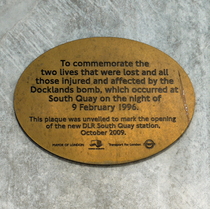 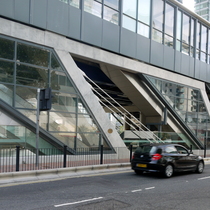 To commemorate the two lives that were lost and all those injured and affected by the Docklands bomb, which occurred at South Quay on the night of 9 February 1996.

This plaque was unveiled to mark the opening of the new DLR South Quay station, October 2009.

Due to a warning the area was evacuated but this was incomplete and two men working in the newsagents opposite were killed. Strangely they are not actually named on the plaque but we've listed them as Commemorated subjects. Plaque unveiled by Tower Hamlets Mayor, Ahmed Omer, who was joined at the event by two of the 39 injured survivors.

The bomber, James McArdle, was freed in 2000 under the Good Friday agreement, two years into a 25 year sentence for conspiracy to murder.

The plaque is about 80 yards from the site of the lorry in which the IRA bomb exploded at 7pm. South Quay Station and three other nearby buildings suffered extensive damage.

We thank our colleague, Alan Patient, for taking these photos.

2016: We were contacted by George Legg of King's College London, who is involved in a project concerning this bomb and its long-term impact.

This section lists the subjects commemorated on the memorial on this page:
Docklands IRA bomb

all those injured and affected by the Docklands bomb

Two were killed and 39 people were injured by the Canary Wharf IRA bomb.

This section lists the subjects who helped to create/erect the memorial on this page:
Docklands IRA bomb