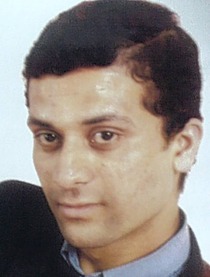 Our colleague Andrew Behan has researched this man and found the photo: there is some confusion over his name but the England & Wales, Civil Registration Death Index held at General Register Office (GRO) in London, gives his full name was Inam Ul-haq Bashir. He was born on 22 November 1966.  He was killed working in his newsagent shop as a result of an IRA terrorist explosion at Canary Wharf, aged 29 years, on 9 February 1996.

This section lists the memorials where the subject on this page is commemorated:
Inam Bashir