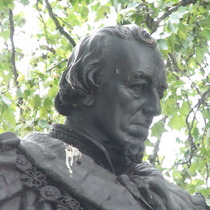 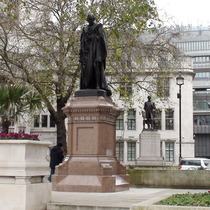 {Cut into the red marble immediately below the statue:}
Beaconsfield

{On the statue base:}
H. Young & Co, Art Founders, Pimlico

Unveiled exactly two years after his death, this statue was central to the foundation of the Primrose League, an organisation formed to promote Conservative principles. The primrose was, apparently, Disraeli's favourite flower - Victoria had sent a primrose wreath to his funeral. A group of Conservatives arranged that on the day of the statue's unveiling all their MPs would wear a primrose. The organisation became very popular, with a motto and badges and so forth; it had one million paid up members at its peak. Each year on the anniversary of his death primrose wreaths were placed at this statue. The League was formally wound up in 2004.

This section lists the subjects commemorated on the memorial on this page:
Disraeli statue

Born Theobalds Road which at the time was 6 King's Road. Novelist, e.g. Conin...

This section lists the subjects who helped to create/erect the memorial on this page:
Disraeli statue