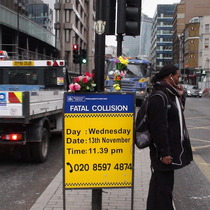 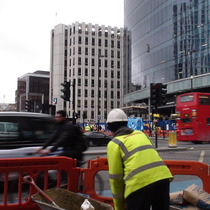 A collision between a double decker bus and a cyclist at 11.30 at night.  The cyclist died in hospital on the morning of the next day, the 14th.  He is as yet (18/11/13) unnamed (at the request of his family) but was a 21-year-old man from St John's Wood.  It is also thought that he was travelling northwards up Leman Street, against the one-way traffic.

What is most distressing is that while we were out photographing this nasty junction and its sad flowers, another cyclist was killed on London's roads, in Camberwell Road. That makes 6 deaths in 10 days. The Mayor seems to think they are all due to careless cycling. This one (Whitechapel High Street) possibly, but there is little evidence of that in the other cases. What the facts show is that cyclists are being killed because they are forced to share the road with lorry drivers who can't see them. The Mayor needs to recognise that and do something about it.

This section lists the subjects commemorated on the memorial on this page:
cyclist killed, unnamed