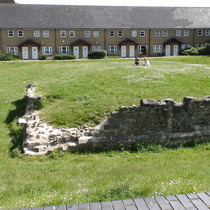 {Information board:}
Over 650 years ago King Edward III, who reigned from 1327 – 77, built a residence at Rotherhithe.  The building was constructed on a low lying island surrounded by marshland.  The king’s original building consisted of a range of stone buildings around a court, part of the walls still stand today.

The buildings were surrounded by a moat on three sides and originally open to the River Thames on the north side.  This allowed the king to arrive by boat and at high tide to moor up against the steps that led from the river to a gatehouse located in a tower.  The range of buildings included a hall with a fireplace, the King’s private chambers, kitchens and other buildings.  Further south, on drier land, was an outer court with other buildings surrounded by an earth bank.

What was the function of the house at Rotherhithe?  It is not a hunting lodge, since there was no attached royal park and Edward III built many hunting lodges elsewhere.  Documentary reference to the housing of the king’s falcons ‘in the chamber’ conjures up the possibility that one sport was falconry over the river or the surrounding marshes; Edward was a keen and expert falconer.

By the end of the 16th century the Thames waterfront had been pushed northwards by land reclamation, with a road running along a river embankment.  The old King’s residence was now completely enclosed by a moat.  The Crown eventually sold the residence and it passed into private hands and was known as the moted place.

In the 17th century the site became used as a pottery and in the 18th and 19th centuries warehouses were built across the site.  In fact the façade of the north wall of the 14th century inner court was still standing in 1907, incorporated into one of the warehouses, and fortunately was recorded at this time which has allowed us to make an accurate reconstruction of the buildings.

In the 1970s the warehouses were demolished and in the 1980s the area was to be redeveloped as part of the London Docklands Development Corporation (LDDC).  Archaeological investigations conducted by the Museum of London in the 1980s established that remains of Edward III’s residence survived and in collaboration with English Heritage and Southwark Council the remains have been preserved and made accessible to the public.

Our 'inscription' comes from the modern information panel just outside our photo to the right, as does the artist's impression of the building and the plans showing the site.

This section lists the subjects commemorated on the memorial on this page:
King Edward III manor house

This section lists the subjects who helped to create/erect the memorial on this page:
King Edward III manor house