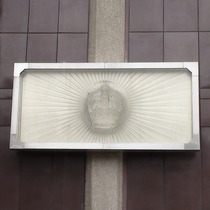 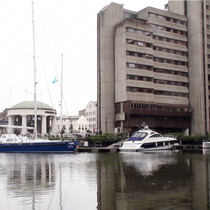 {On an information board below, a Silver Jubilee crown logo with this below:}
The Silver Jubilee Crystal Crown was sculpted on this site by Arthur Fleischmann KCSG, FRBS, MD, who pioneered carving in Perspex. The block measures 10' 9" by 8" thick and weighs two tons. It is the largest solid block of Acrylic in the world. It was originally made in 1968 for Stanley Kubrick's film "2001 - A Space Odyssey", but was rejected by the director in favour of the now famous black basalt monolith.

Her Majesty the Queen unveiled the sculpture on June 5th 1977.

{St Katharine Docks, twice, around the logo for the company}.

The information states that the sculpting was done "on this site", but the Coronarium was roofless.  The photos at Fine Art Facts show the already-carved block being transported, presumably from wherever it was carved. But see below...

2017: Via Facebook Andrew Cunningham has directed us to an interview with Fleischmann's wife, Joy, who describes how they were "sheltered under polythene sheet with Calor gas and a rotisserie to cook on and we were literally camping out there from February onwards" and "it had to be moved a short distance".

Stanley Plastics made the plain acrylic block in the 60's for Kubrick but it was not used in the film. When MGM closed the Borehamwood film studios in 1970 Fleischmann acquired the block and kept it until St Katharine Docks commissioned him to provide a Silver Jubilee memorial. He carved the crown and the Coronarium Chapel was built to house it. The Crystal Crown was unveiled and displayed in the roofless Coronarium Chapel until 2000 when it was evicted in favour of a branch of Starbucks. That's when the information board was put up.

IanVisits' post alerted us to this unusual art work. The story is told at Fine Art Facts.

Another memorial which could be here but isn't (well, we didn't see it) is one to the "first ever (civilian) mobile phone call made in the UK. The call was made {to Vodafone offices in Newbury} from London’s St Katharine Docks on 1 January 1985, via the Vodafone network, by comedian Ernest Wise" ... or was it?  We learnt about this event, which took place in front of the Dickens Inn, at the ever-fruitful Londonist. Apparently the son of Vodaphone's chairman had already phoned his dad in Surrey from a New Year's Eve gathering in Parliament Square, a few hours before Ernie made his well-publicised call.

2016: The Sun reports that a plaque is going to be erected to commemorate that phone call - the plaque will be in Newbury.

This section lists the subjects commemorated on the memorial on this page:
Crystal Crown

This section lists the subjects who helped to create/erect the memorial on this page:
Crystal Crown

Sculptor.  Born Bratislava which was in Hungary at the time.  Studied medicin...

This section lists the other memorials at the same location as the memorial on this page:
Crystal Crown

{On the broken piece of stone to the upper right:}King's Cross Station concou...

The pediment is at about ground level, between the window and the pavement ra...