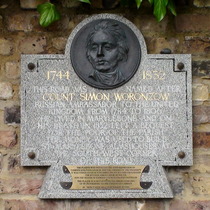 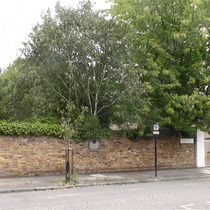 {Either side of the relief bust:}
1744 – 1832
This road was named after Count Simon Woronzow, Russian Ambassador to the United kingdom from 1784 – 1806.  He lived in Marylebone and on his death in 1832 left a bequest for the poor of the parish.  The money was used to build St Marylebone Almshouses at the south-west corner of this road.

{On the brass in-lay, shaped like a scroll:}
The plaque was installed {by} the kind permission of Camden Borough Council and the owners of this property.  It was unveiled on 26 November 2002 by H. E. Grigori Karasin the Russian Ambassador to the UK and the Mayor of Camden Councillor Judy Pattison.

The plaque is a gift of Peter the Great Company of St Petersburg to the citizens of Camden.

{Some text is inscribed around the edge of the roundel but it seems to be in Russian Cyrillic script, all but:}
2002

It's odd that the plaque is placed here rather than at the almshouses at the other end of the road.  Possibly the Count had a house here, at this end, but we can't find any evidence.

2013: Our colleague, Jamie Davies, had a go at resolving this puzzle and found Humphrys Family tree which confirms that Woronzow lived in this road (“the street where he resided … is now called Woronzow Road”).  However an 1843 map (on-line here) shows the Marylebone Almshouses and some other buildings in the area, but the road now called Woronzow Road does not yet exist and the area around the site of the plaque is not yet built up.  So Woronzow, who died in 1832, could not have lived in the road.  Puzzle unresolved.

Helen Szamuely of London Historians has researched Woronzow and confirms that the road was named for Woronzow in 1843 which, given the map evidence, must have been when it was built.  She also names a number of his London addresses, and none of them are in St John's Wood.

This section lists the subjects commemorated on the memorial on this page:
Count Simon Woronzow

Funded from Count Woronzow's will.  Built in 1836 and then re-built on the sa...

Ambassador. Born Moscow into an old aristocratic family in the Crimea. The th...

This section lists the subjects who helped to create/erect the memorial on this page:
Count Simon Woronzow

We can find nothing about this but guess it is some offshoot of the Russian e...

Architect.  Member of the Russian Academy of Arts.

The Worshipful Company of PlumbersOrdinances 1365, Grant of Arms 1588.Between...