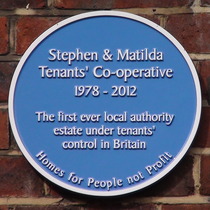 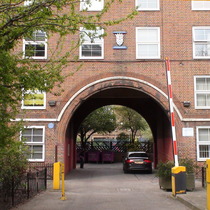 Credit for this entry to:
Mike Jempson

Stephen and Matilda Tenants' Co-operative, 1978 - 2012. The first ever local authority estate under tenants' control in Britain.
Homes for People not Profit

The plaque seems to have been erected to celebrate 34 years which seems odd.

Built as social housing by the GLC in Tower Hamlets. Matilda House is now a block of upmarket flats. At East London Big Flame we find a report that "By 1974 the estate was fully occupied by well organised squatters". The plaque suggests there should also be a Stephen House but we can't find any reference to it. We wonder if these flats were named after the 12th century warring Matilda and King Stephen, or more likely King Stephen and his wife Matilda of Boulogne, who founded St Katharine by the Tower.

2018: Mike Jempson contacted us to say that "the estate was NEVER squatted. As a founder of the co-op" Mike is planning to write a history, which we look forward to seeing and will provide a link.

This section lists the subjects commemorated on the memorial on this page:
Stephen and Matilda

The first ever local authority estate under tenants' control in Britain. Beca...

AFS, London. In memory of auxiliary firewoman, Yvonne Green, who died near th...