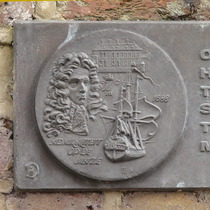 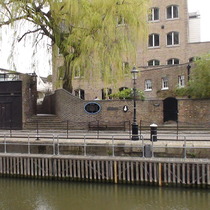 On the occasion of the visit of HM Queen Beatrix of the Netherlands this plaque was presented to St Katharine’s Dock by T. W. F. Flottilla to commemorate 300 years of Anglo-Dutch Maritime Friendship.  29 June 1989.

{In the pictorial roundel at the left:}
W III {under a crown} 1688
Admiraliteit Op de Maze {Dutch for Admiralty of the Maze}

{The head surely represents William. The ship might reference William's 1688 invasion or the Admiralty of the Maze or both. We cannot identify the building.}

We've not done well with this memorial. Can't explain the connection (assuming there is one) between King William and St Katharine's Docks. Nor why the Admiralty of the Maze/Rotterdam has been chosen to be named rather than any, or all, of the other 4 Dutch Admiralties (and the sculptor also coming from Rotterdam suggests a connection). Nor can we identify the building shown on the roundel. Kensington Palace is a candidate but we can't see any resemblance. And we don't even know if T. W. F. Flottilla is a company or a person. Rubbish really!

Of the three plaques in this picture the left-most is a modern information panel explaining how locks work so it does not qualify for our attentions.

This section lists the subjects commemorated on the memorial on this page:
Anglo-Dutch friendship

This section lists the subjects who helped to create/erect the memorial on this page:
Anglo-Dutch friendship

Admiralty of the Maze

Admiraliteit Op de Maze, Dutch for Admiralty of the Maze, also known as the A...

A company, a person?  We can find no information.

She had a busy time on her visit to England in June 1989 to help us celebrate...

Sculptor.  Born and worked in Rotterdam.

This section lists the other memorials at the same location as the memorial on this page:
Anglo-Dutch friendship