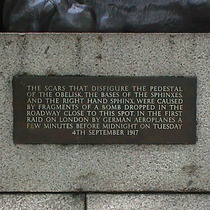 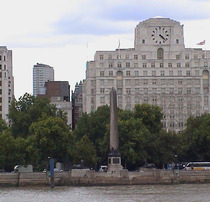 The scars that disfigure the pedestal of the obelisk, the bases of the sphinxes, and the right hand sphinx, were caused by fragments of a bomb dropped in the roadway close to this spot, in the first raid on London by German aeroplanes a few minutes before midnight on Tuesday 4th September 1917.

This section lists the subjects commemorated on the memorial on this page:
Cleopatra's needle - war damage

This section lists the other memorials at the same location as the memorial on this page:
Cleopatra's needle - war damage

Site of St. Benet Gracechurch, demolished 1876.The Corporation of the City of...

Here are several sorts of work for the poor of this parish St Margarets Westm...