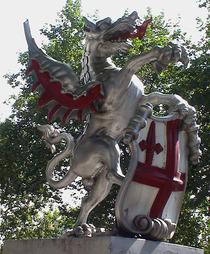 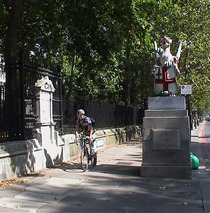 {There are two plaques on the pavement side of the dragon's pedestal:}
City of London
These dragons represent a constituent part of the armorial bearings of the City of London and have been erected to indicate the western boundary of the city.
This commemorative plaque was unveiled by the Rt. Hon. The Lord Mayor Sir Ralph Edgar Perring on 16th October 1963.
Dudley Gordon Mills Esq., CC - Chairman Streets Committee
Francis John Forty OBE, B Sc, MICE, FSA, City Engineer

{and:}
These dragons were formerly mounted above the entrance of the City of London Coal Exchange which was demolished in 1963.

{The shields supported by the dragons are inscribed, on the back:}
Dewer, London 1849.

A second 1849 cast-iron heraldic dragon rears up on the other side of the busy road. The Pity of London has a short video showing the installation of this dragon's near cousin, Crunchy - The Credit Crunch Monster.

There are apparently 13 dragons guarding the boundary of the City of London, these two being the model for most of the others. Londonist has a drawing of the entire herd, and Ian Visits has mapped them.

This section lists the subjects commemorated on the memorial on this page:
city boundary dragons

This section lists the subjects who helped to create/erect the memorial on this page:
city boundary dragons

This section lists the other memorials at the same location as the memorial on this page:
city boundary dragons

This memorial has its own webpage: Broadcasting House memorial. The 10 metre ...

Seeing as how this face has only one eye, and it's closed, the quotation seem...