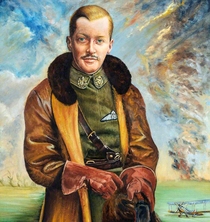 Airman. Born William Barnard Moorhouse (later adding his mother's maiden name), at Rokeby, Yorkshire. He took flying lessons, and was the first to cross the English Channel, from Douai to Ashford, Kent with two passengers in a biplane. At the outbreak of WW1, he enlisted in the Royal Flying Corps as a second lieutenant. In Kortrijk, Belgium, he bombed a railway junction and was immediately plunged into a heavy barrage of gunfire. His plane was hit and he was wounded by a bullet in his thigh. Returning to base, he again ran into heavy fire and was wounded twice more. He died from his wounds the following day. For his actions, he was awarded the Victoria Cross, the first airman to receive it.

This section lists the memorials where the subject on this page is commemorated:
William Rhodes-Moorhouse VC

{Below an image of a Victoria Cross medal:} Second Lieutenant William Rhodes-...