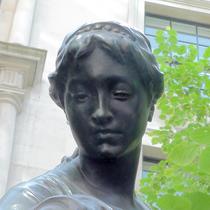 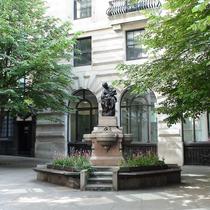 {On the front of the statue's plinth:}
Erected 1878 at the expense of John Whittaker Ellis Esq. Alderman & William Hartridge Esq. Deputy, supplemented by a vote in Wardmote.

{Just above the basin:}
Also by donations from The Drapers Company and the Merchant Taylors Company

The statue shows a mother with two children, one at her breast. We can't see a modern drinking fountain being associated with such an image. But we'd accept any decorations, just give us the water!
The subject was controversial at the time and a letter to the 'Globe', entitled 'An arrangement in milk and water', referring to the neighbouring statue of George Peabody, read: 'Do you not think, Sir, that propriety demands that Mr. Peabody's chair should be turned, at least until the delicate operation of lacteal sustentation be concluded, or until the Drapers or Merchant Taylors, to whom the young woman and youngsters belong, provide them with the requisite clothing.' This quote comes from Ward-Jackson's excellently thorough 'Public Sculpture of the City of London'. Note: a number of sources describe this fountain as commemorating Alderman William Bartman. Neither Ward-Jackson nor we have found any evidence to corroborate that. Despite its entry in London Remembers this fountain appears to have been erected without the specific intention of commemorating anyone or anything, but now we've done the research it's staying in.

See the nearby Peabody statue for how these two monuments changed position in the 1980s.

This section lists the subjects who helped to create/erect the memorial on this page:
Charity drinking fountain, La Maternité

Originally an association of tailors. Owns the Merchant Taylors' School.

Sculptor. Born and died in Paris. Fervent supporter of the Paris Commune. Whe...

This is a lovely piece of sculpture. The cut off fluted column possibly indic...