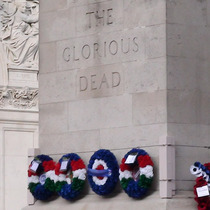 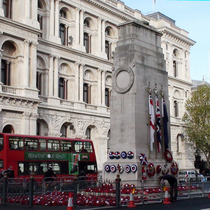 "Cenotaph" is Greek for "empty tomb".   The shape is a plain pylon with a coffin on top.  This memorial by Lutyens, for the first anniversary of the 1919 Armistice, was originally a temporary structure in plaster and wood, but it proved so popular that it was reconstructed in Portland stone as a permanent memorial. The inscription for WW2 was unveiled in 1946 by George VI. There is an exact replica in London, Canada.

We've read that the planes are subtly tapered and meet at a point 1,000ft in the air.

About this memorial, in his 1928 People's Album of London Statues, Osbert Sitwell writes: "we were compelled to choose a monument without any sculptured decoration on it, so atrocious would have been the detail had it been entrusted to a bad academic sculptor, so great the outcry had the commission gone to a good modern one."

Vintage Everyday reproduces some notorious photographs taken at the Cenotaph during the two minute silence on Armistice Day in 1921, 1922, 1923, and 1924. These photographs were produced by Ada Deane, the 'spirit photographer', and purported to show the spirits of the dead amongst the crowds at the ceremony, including some identifiable people, whose faces happened to have recently appeared in newspapers.  She was widely denounced as a fraud but some chose to support her, including Arthur Conan Doyle.

This section lists the subjects commemorated on the memorial on this page:
Cenotaph

This section lists the subjects who helped to create/erect the memorial on this page:
Cenotaph