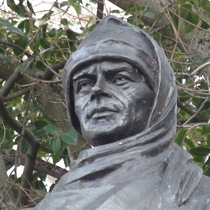 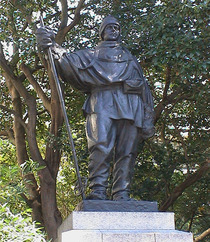 {On a brass plaque fixed to the front of the plinth:}
Robert Falcon Scott, Captain Royal Navy, who with four companions, E.A. Wilson, H.R. Bowers, L.E.G. Oates, E. Evans, died March 1912 returning from the South Pole.
Had we lived I should have had a tale to tell of the hardihood, endurance and courage of my companions which would have stirred the heart of every Englishman. These rough notes and our dead bodies must tell the tale.
From Scott's diary.
{Along the base of the plinth:}
Erected by officers of the fleet.

This section lists the subjects commemorated on the memorial on this page:
Captain Scott statue

This section lists the subjects who helped to create/erect the memorial on this page:
Captain Scott statue

officers of the fleet

Erected the statue to Scott in Waterloo Place in 1915.

The statue was dedicated on the centenary of Catherine Booth's birth, and aga...