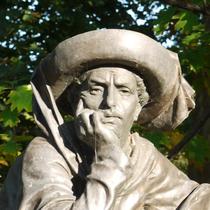 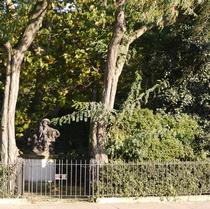 {On the right side of the plinth:}
God wills, man dreams, the work is born.
God willed that the earth be one,
That the sea not divide but unite it.
Anointed by Him, you unveiled the foam,

And the white crest went from island to continent,
Like dawn to the world’s end,
And suddenly the entire earth
Appeared, round, from out of the blue.
Fernando Pessoa

{On a small plaque attached to the lower right side of the statue:}
Fundicao de arte de Canelas, LDA. {the founders}

The origin of the statue is mysterious, as it was erected more than fifty years after the sculptor's death. Wikipedia says it was made in 1915. A duplicate of the statue is located at Fall River, Massachusetts, but is credited to the sculptor, Aristide Berto Cianfarani. The Duke of Westminster was present at the unveiling. At the official page of the Presidency of the Portuguese Republic we found a speech concerning the unveiling, where we learn that this is the first statue of a Portuguese personality to be erected in London and that Pessoa wrote the poem about Henry.

This section lists the subjects commemorated on the memorial on this page:
Henry the Navigator statue

Prince. Born in Porto, Portugal. Son of King John I of Portugal and Philippa ...

This section lists the subjects who helped to create/erect the memorial on this page:
Henry the Navigator statue