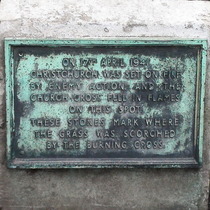 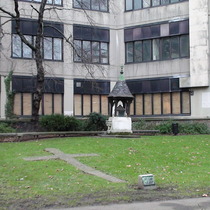 On 17th April 1941 Christchurch was set on fire by enemy action and the church cross fell in flames on this spot. These stones mark where the grass was scorched by the burning cross.

This section lists the subjects commemorated on the memorial on this page:
Burning Cross

This section lists the other memorials at the same location as the memorial on this page:
Burning Cross

{On the mosaic:}St Oliver Plunkett pray for us. {On the plaque:}Saint Oliver...