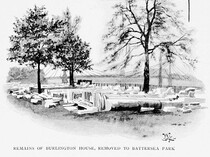 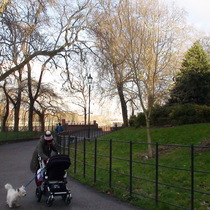 Even in our rather dismal photo you can see that there is a hill here, in an otherwise uniformly flat Park. Why is this hill here? We came across a possible explanation in George Gissing’s ‘The Odd Women’ (1893), at the start of chapter V: “At the corner of Battersea Park which is near Albert Bridge there has lain for more than twenty years a curious collection of architectural fragments, chiefly dismembered columns, spread in order upon the ground, and looking like portions of a razed temple. It is the colonnade of old Burlington House, conveyed hither from Piccadilly who knows why, and likely to rest here, the sporting ground for adventurous infants, until its origin is lost in the abyss of time.”

Wikipedia have an image of this lovely 1808 colonnade, before its removal from Burlington House.  It was designed by James Gibbs and this architect's plan shows a pair of colonnades. This photograph show that the colonnades were at the south of the Burlington House courtyard, flanking the gate onto Piccadilly.

British History Online explains that in 1867 the Burlington House colonnades were demolished, the stones numbered and, with a plan for re-erection, removed to Battersea Park (which had only recently been laid out, 1846-64). A note at British History Online led us to London City Suburbs by Percy Fitzgerald (1893), where page 222 has this drawing showing the jumble of stones described by Gissing.  Nothing was done until 1893 when the costs of re-erection were considered too high and it was decided to pulverize the stones to be used as hardcore.

But did this actually happen? The costs of removing the stones may have outweighed any potential payment for them. Leaving them in situ, piled up and buried under soil and plants, may have been a cheaper option. Were the Burlington House colonnades lost or do they lie buried in this hill, ready to rise again?

This section lists the other memorials at the same location as the memorial on this page:
Burlington House colonnade

This tree is in the borough of Wandsworth. There are 32 Greater London boroug...