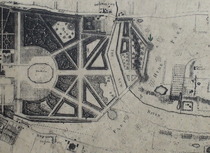 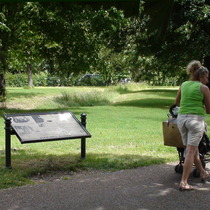 18C
Between 1728 and 1733, one of the leading figures in landscape design in England, Charles Bridgeman, worked on Kensington Gardens, firstly for King George I and then for Queen Caroline, the wife of George II.

To separate the as yet undeveloped Hyde Park from the more formal Gardens, ornamental bastions were created, faced in brick, with a typical Bridgeman ha-ha ditch (probably some two metres deep) on the Hyde Park side.  An avenue of trees lined the bastion walk, and circles of trees were planted on the bastions themselves, as shown on Rocque’s plan of 1736.

19C
The length south of the Serpentine was demolished in 1833 but the two Buck Hill bastions remained in place for at least another thirty years.  They could still be seen in the background beyond the Crystal Palace at the Great Exhibition of 1851 and they show up on large scale Ordnance Surveys later in the century.

20C
By the early 1900’s, however the brick wall had been removed and the ha-ha partly filled in, giving a green “fosse” along which an iron railing was set.  Following a murder in 1915, the remainder of the ditch hollow was filled in and covered over, largely using domestic rubbish.

All that remained of this interesting feature was a slight depression in the turf.

In 1995
The line of the north bastion was re-defined by excavating much of the twentieth century fill, the resultant fosse once more marking part of the 1730 boundary between Kensington Gardens and Hyde Park.

Hawha’w .... It is sometimes written haha, and is absurdly pretended ... to be derived from the expression of surprise at the sight of it!  A fence or bank that interrupts an alley or walk, sunk between two slopes and not perceived till approached;… intended generally, to open prospects by removing walls or other impediments and yet to preserve a fence ...

Ba’stion … a huge mass of earth, usually faced with sods, sometimes with brick, rarely with stone, standing out from a rampart, of which it is a principal part, and was anciently called a bulwark…..

This is really an information board rather than a plaque and has a number of pictures with captions. We have transcribed the main body of the text and for our close-up photograph we show Rocque’s plan of 1736.

Pastscape has a good description of the layout of the bastions and the ha-ha, and how that relates to the current topology.

See another board about the same structure further south.

This section lists the subjects commemorated on the memorial on this page:
Buck Hill bastion

This section lists the subjects who helped to create/erect the memorial on this page:
Buck Hill bastion

First plastic in the world, known as 'parkesine', invented by Alexander Parke...

British History On-line gives "This part of the site was rebuilt in 1951–5 fo...