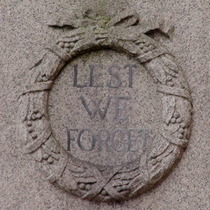 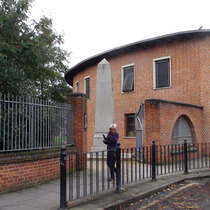 {High up, at the same level as the wreath the other three sides of the obelisk each carries one word, clockwise:}
Sacrifice
Honour
Devotion

{and lower down:}
Their name liveth for evermore.

This lead inlay lettering is in remarkably good condition so we think it has recently been renewed. Sadly already one letter has gone missing and others look a little loose.

Various community buildings were erected in the Park in the 1980s and 90s and London Gardens Online say the war memorial was "re-sited". The relative positioning of this monument, the path, the gate and the walls is less than successful since the front of the monument faces the boundary wall. The building and the wall seem new so we don't see why the whole configuration could not have been better designed, or the memorial moved to a better position.

Post-WW1 this monument would have been in the Borough of Poplar, very near the eastern edge, but we can't assist with identification of where the NE ward was; well, here, obviously but we mean the boundary.

This section lists the subjects commemorated on the memorial on this page:
Bromley by Bow war memorial

men of the N. E. Ward of this Borough who fell in WW1

This section lists the subjects who helped to create/erect the memorial on this page:
Bromley by Bow war memorial

residents of the N. E. Ward

The monument, designed by Sydney March, is grade II Listed. Prior to 2012 Goo...