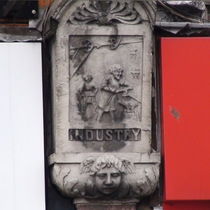 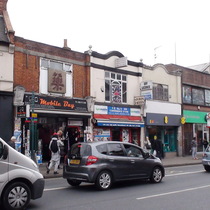 This 1940-67 NLS map shows a 'picture theatre (disused)' at number 24 (now flat-fronted post-war shops), and at Cinema Treasures we found two postcard images of The Broadway Cinematograph Palace, opened in 1912. In these you can just see, either side of the cinema, the roof arches of numbers 22 and 26-30, looking very much as they do now. Other maps c.1895 show this section of road without continuous, flush, shopfronts. So it seems a fair assumption that the Palace and the 4 flanking shops were all designed and built at the same time. You can see that, as Cinemas Treasures says, the cinema's "facade was highly decorated in white stone" so we can believe that the developers decided to spend a little bit extra on some unusual decorations for the shops too.

What is now known as White City had hosted a number of exhibitions 1908 – 1912 so concepts such as Industry and Travel were in the air.

Faded London spotted these reliefs in 2009, indeed, spotted half more than we did. So, until we get back there we are, with thanks, using their photo of Commerce.

It has to be admitted that the carving on these reliefs is not of a high quality. They are also distressed through age and lack of care so we expect they will not be greatly missed when the inevitable redevelopment happens.

This section lists the subjects commemorated on the memorial on this page:
Broadway Palace development - Tooting - Industry

This section lists the other memorials at the same location as the memorial on this page:
Broadway Palace development - Tooting - Industry