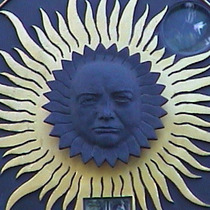 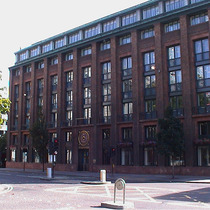 {Winston's face is at the centre of a golden sunburst. This is surrounded by gilded signs of the zodiac, on an azure background. Outside this are the names of the 12 months, then the 12 hours in Roman numerals and then the digits 5, 10, etc. up to 60. The day of the month is displayed in a window below Winston's face. There is another window to the upper right whose function is not clear. We believe the different rings of the clock rotate so that the clock is read by just looking at what is currently at the top, where noon normally is on a more mundane time-piece.}

According to the very interesting London Sundials this is "not a sundial but an unusual astronomical sundial related clock "
Designed by Frank Dobson and Philip Bentham in 1959.

Building designed by Sir Albert Richardson to house the Financial Times and the pink brick and sandstone was chosen accordingly.  From London Sundials : "This building (1955-1959) is named after Bernard Bracken, former chairman of the Financial Times, which was published here until the 1980s. The building was among the first post-war buildings in the City to be listed and its redevelopment retained the entire outside facade, including the elegant astronomical clock approximately 1 metre in diameter bearing at its centre a face of Winston Churchill, a personal friend of Bernard Bracken.  Bracken ran the Ministry of Information, supposedly the model Orwell used for his Ministry of Truth, and some say the initials of Big Brother are no coincidence.

The work of Philip Bentham in gilt metal and enamel, it has echoes of the formality and sophistication of a dial. Embellished with Roman numerals, it depicts months of the year, signs of the zodiac and a sunburst motif."

London Details has an excellent post about this building, its listing and its 1987 partial redevelopment.  And another one about Brendan Bracken.

2019: The FT returns to a newly renovated Bracken House.

This section lists the subjects commemorated on the memorial on this page:
Bracken House

This section lists the subjects who helped to create/erect the memorial on this page:
Bracken House

The only reference we can find to "Shaft's Stairs" concerns a 1970 Civic Trus...