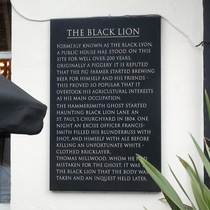 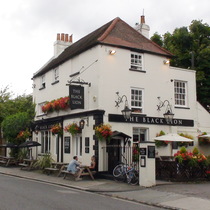 The Black Lion
Formerly known as the Black Lyon, a public house has stood on this site for well over 200 years. Originally a piggery it is reputed that the pig farmer started brewing beer for himself and his friends - this proved so popular that it overtook his agricultural interests as his main occupation.
The Hammersmith ghost started haunting Black Lion Lane, and St Paul's Churchyard in 1804. One night an excise officer, Francis Smith filled his blunderbuss with shot, and himself with ale before killing an unfortunate white-clothed bricklayer, Thomas Millwood, whom he had mistaken for the ghost. It was at the Black Lion that the body was taken and an inquest held later.

The ghost was covering quite a large area - St Paul's Churchyard was at what is now the Hammersmith roundabout, three quarters of a mile away.

In our photo the plaque is hidden between the sun umbrellas at the left.

We have decided generally not to collect pub plaques since they are often either verbose historical lists of who, reportedly, drank here and/or little more than an advertisement. However this one is interesting since it locates a murder which became important for legal history.

This section lists the subjects commemorated on the memorial on this page:
Black Lion pub ghost

See Francis Smith for the story.

The Susan Daniel Rose BedThe roses in this flower bed are named after Susan D...

Boys is given as the Incumbent and Barclay as the Treasurer. This is an attra...

From FBU: "The first memorial plaque to honour the lives of firefighters who ...

William Felton's carriage works was close to this spot. In 1803 he built a ca...