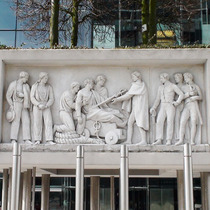 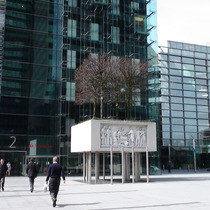 See "2018" below for the event that this relief depicts.

Camden's Public Art List of Major Works in the Borough (warning: large file) says that this was "Commissioned by British Land" - not in 1826 it wasn't! Items of this sort are often architectural features of buildings previously on the site. Prior to building their glass and steel constructions, the developers have to demolish the existing buildings and sometimes "reclaim" particularly interesting features to redisplay on the site.

2018: We thank Patricia Wenz for contacting us with information on the provenance of this item which links it with Marble Arch. Patricia points us to Euston Towner “… it’s a vast white marble frieze depicting the surrender of Spanish admiral Don Francisco Xavier Winthuysen in 1797, one of two high carvings intended to form part of a triumphal arch commissioned by George IV. While the project was never completed, a scaled down version became Marble Arch; other bits were used in the facades of both the National Gallery and Buckingham Palace.”

In 1996 British Land demolished the Euston Road Thames Television building, developed Triton Square and installed a few artworks including this relief. The NG and BP pieces are presumably still on those buildings so we wonder where this St Vincent panel was between c.1830 and 1996. Also, why was this artwork chosen for this location?  There seems to be no connection at all.

Wikipedia has an image showing Marble Arch as originally designed with all the sculptural work in place, but only one side. Just our luck, the St Vincent panel must have been intended as one of the three frieze panels on the other side.

This section lists the subjects commemorated on the memorial on this page:
Battle of St Vincent frieze

This section lists the subjects who helped to create/erect the memorial on this page:
Battle of St Vincent frieze